Two of our lawmakers have lost their grandmothers recently, Rep. Clark Boyd and Rep. Ryan Williams. You will want to remember their families. It looks as if the General Assembly could possibly adjourn the end of next week so these last few days will be more than hectic, unpredictable, stressful and very frustrating.  Please pray for clear heads and pure hearts.

JONATHAN'S CORNER:
​Praise be to God for His blessings in helping us pass our bill out of committee. The first thing we did was to meet with Representative Reedy to make sure that all was set for committee at 10:00. In the time we had before that time, we solicited support for the Municipal ID​ bill. When committee started, it went smoothly for a short time. Our amendment was added. However, one of the other Representatives wanted to amend the bill's definition of sanctuary policy. There was a significant amount of time spent discussing the constitutionality of detainers and their probable cause. The amendment - which would have gutted the bill - was narrowly beaten. The next motion to defeat the bill was a motion to move it to summer study, effectively pushing it off for a long time. Finally, there was another amendment proposed to remove the language about detainers. This was also narrowly voted down. At this point, we were convinced that it would fail. However, God's providence intervened and it was voted out of committee. It was unexpectedly moved to the finance committee, but we were thankful for our victory. The rest of the day was spent speaking to the legislators about support for our other bills, and working through logistics.

LUKE'S CORNER:
This week for the internship was extremely exciting. We saw the Sanctuary City bill pass and get moved to Finance.  We went to several other committees and talk to representative about it going to finance since there was no physical note on it. Miss Bobbie was very perplexed on why it would go to finance. We looked at all the people that had co-signed with the bill and talked to a few of them. All in all it was a very educational, exciting experience.

LAURABETH'S CORNER:
We had an exciting day up at the capitol! We watched the House Floor session early in the day and watched all the representatives honor Speaker Beth Harwell with HJR 906 and a beautiful rocking chair! It was very sweet to watch, and afterwards we went to meet with our sponsor, Jay Reedy, to talk about the sanctuary city bill. I've grown to really enjoy listening and talking to our legislators, it's enlightening to hear them talk about the issues that matter to them! Listening to Mrs. Bobbie and Representative Reedy talk together about the bill was just wonderful, and I'm very glad that I got the opportunity to do so! Though, once we had our lunch (Two weeks in a row!), we moved on to the Finance, Ways & Means subcommittee to watch our sanctuary city bill (With no fiscal note) pass through. There was a short testimony on the bill, which didn't make any sense, because the testimony had nothing to do with the financial impact of our bill, of which, there is none. All in all, though, it was a productive and enjoyable day, and I, as always, had a great time with Mrs. Bobbie! 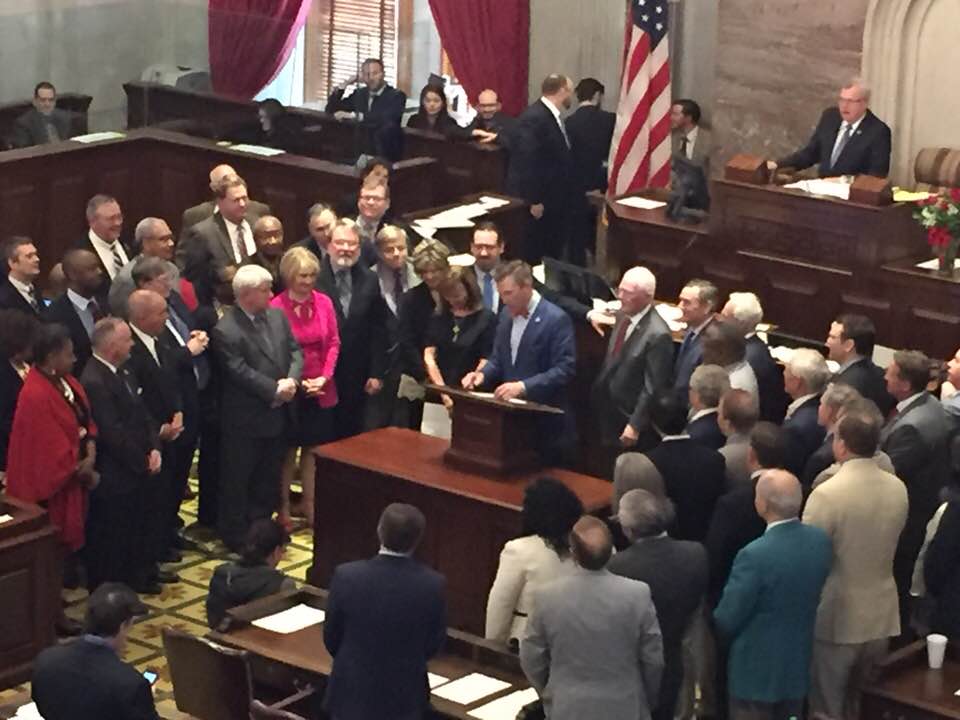 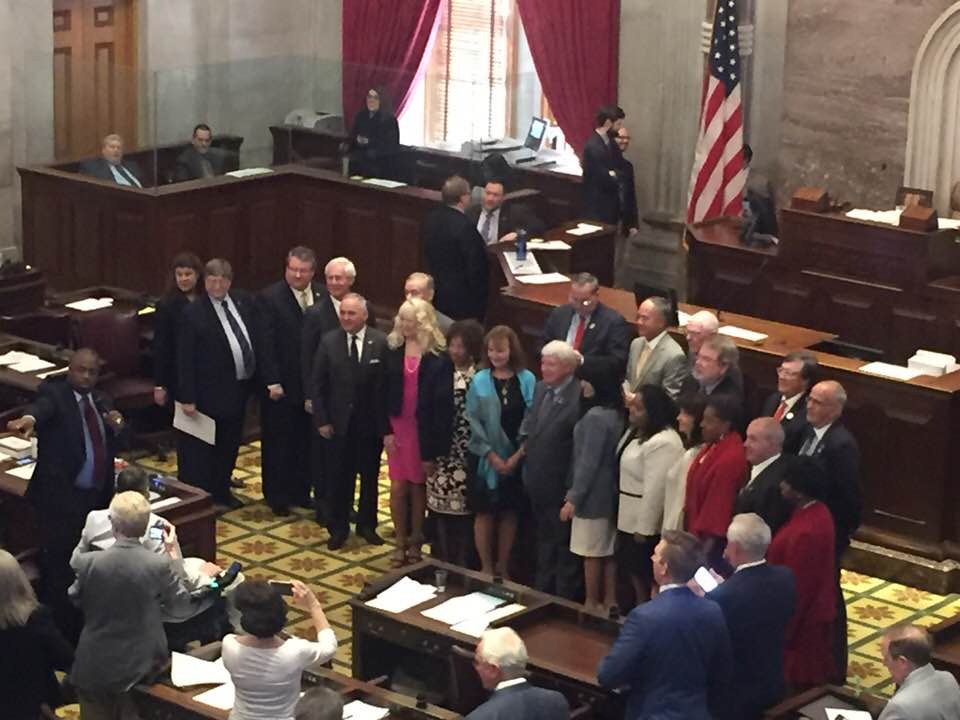 [Left] Her colleagues honored Speaker Beth Harwell on her retirement from the TN House of Representatives with Resolution HJR906. She was first elected to the 1989-1990 96th General Assembly, and she has served as Speaker for the past eight years. The House members gifted her with a beautiful hand made rocking chair and named the new Cordell Hull Plaza the "Speaker Beth Harwell Plaza". The other picture is the group of sitting House members who are not running for re-election. We will have lots of new faces next year.

We are down to the final days and what will be the final hours.  It is dangerous to be at this point in the legislative session with bills still in motion. Despite the support we have had, the advocates for ILLEGAL ALIENS have been pushing back as hard as possible at EVERY step.

That is why YOUR INVOLVEMENT is VITAL. If our supporters don't step up and CONTINUE to contact their legislators, we will lose and they will win.

STATUS: Praise the Lord, on Tuesday, HB2315, as amended, was FINALLY voted out of the State Government Committee 6-4-1: Reps. voting aye were: Daniel, Hulsey, Lamberth, Littleton, Rudd, Sanderson -- 6.    Reps .voting no were: Jernigan, Powell, Shaw -- 3.   Rep. present and not voting were: Ramsey -- 1.
We are so very grateful to the lawmakers who supported this important legislation

OK, I AM CONFUSED:
We were so encouraged to finally get HB2315 out of the State Government Committee, but surprised that, WITHOUT a fiscal note, it was sent the Finance.  We were in Finance Sub after lunch on Wednesday where the ADVOCATES FOR THE ILLEGALS were once again permitted to testify against the bill, not speaking about anything that had to do fiscal concerns.
Eventually it was voted out with Fitzhugh, Hazlewood, Love requesting to be recorded as voting No.

Later in the day we were in the Full Finance Committee where Rep. Reedy was peppered with more questions.  Co-sponsor Steve McDaniel raised some questions that he didn't understand, and asked that the bill be moved to the LAST CALENDAR and the committee agreed. STOPPED once again. The LAST CALENDAR will be heard on Wednesday, April 18.
[We are waiting for the House bill to get to the Senate so that Sen. Green and 'substitute and conform' to the House language.]

ACTION: Please, POLITELY, urge the members of the Finance committee to support this bill and get it to the Floor

STATUS:  We are thrilled to report that, on Thursday, our wonderful sponsor, Rep. William Lamberth, successfully 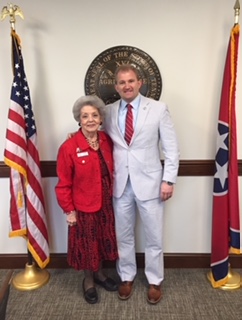 shepherded HB2312, as amended, through the House floor process where it passed 72-23-1.

SENATE STATUS: Sen. Green was waiting for the House bill to get to the Senate so he can substitute and conform to the language passed in the House, so it will probably be on the Floor Wednesday.
ACTION:  Please politely begin to contact the members of the Senate and URGE them to support this legislation.

PROTECTING PASTORS:
SB 2679 by *Bailey, HB 2683 by *Weaver, MOODY, KUMAR, ROGERS, FAISON, WHITE M, WINDLE, DOSS, HARDAWAY, POWERS, HILL T, HICKS, TERRY, LAMBERTH
Religion and Religious Organizations - As introduced, extends the prohibition on a governmental entity, other than a court, subpoenaing a clergy member's sermon or notes for use in a civil or administrative action to also include a prohibition on compelling a clergy member to testify regarding a sermon. Passed Senate, Ayes 32, Nays 0    03/19/2018, Passed H., Ayes 76, Nays 7, PNV 6    03/22/2018, Transmitted to Governor for action.    04/02/2018
The BIG story here is who voted AGAINST protecting pastors:
Reps. voting no were: Akbari, Clemmons, Miller, Mitchell, Parkinson, Stewart, Turner -- 7. Reps. present and not voting were: Beck, Cooper, Gilmore, Jernigan, Powell, Travis -- 6.
Companion bill has been assigned Public Chapter Number 663 by the Secretary of State.

Legislators grill Haslam UT board nominees over Sex Week and more; one withdraws .