(NOTE: TENNESSEE WAS THE FIRST STATE)
There are 11 states — Alabama, Arkansas, Arizona, Louisiana, Kansas, Mississippi, North Carolina, Oklahoma, South Dakota, Tennessee and Washington — that prohibit the use of foreign law in their state courts as of 2017, according to the National Conference of State Legislatures. It is now being introduced in Idaho.

Shariah in American Courts: The Expanding Incursion of Islamic Law in the U.S. Legal System

January 2012: American Laws for American Courts Accomplishes What the Oklahoma Amendment Has Not  (Response to Oklahoma court decision) 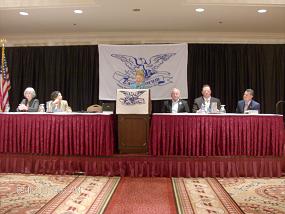 UPDATE: Tennessee is a Leader in the Fight Against Using Foreign Laws - Now Everyone Else Wants to Follow

2011 UPDATE: A number of states have introduced similar bills in their state legislative body.  In addition, on March 9, 2011, U.S. Congressman Sandy Adams (R-FL), along with 56 cosponsors, including TN Congressmen Black, Blackburn, Duncan, Fleischmann, and Roe, has introduced H.R. 973, a version of our legislation.  It has been referred to the House Subcommittee on the U.S. Constitution

Our very own Joanne Bregman delivered a definitive speech on Rejecting Foreign Law. This is the story behind our TN Law for TN Courts bill that we passed in the 2010 legislative session; the first of its kind in the nation. The text of the speech is available HERE.  You want to read and share it.  In addition, you will want to go HERE  to order Sharia Law for Non-Muslims. 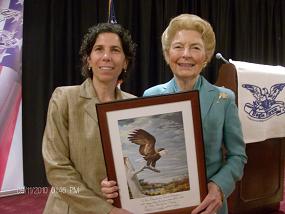 Joanne and her husband, Dr. Daniel Bregman, Chapter Leader, ACT for America Middle Tennessee, received the National Eagle Award for the State of Tennesse for their tireless work for God, Family and Country.
[Right: Joanne and Phyllis Schlafly, President and founder of Eagle Forum.]

As amended and passed, it is the public policy of this state that the primary factor a court, administrative agency, arbitrator, mediator, or other entity or person acting under the authority of state law may consider in granting comity to a decision rendered under any foreign law, legal code, or system against a natural person in this state is whether the decision rendered either violated or would violate any right of the natural person of this state guaranteed by the Tennessee Constitution or the United States Constitution or any statute or decision under those constitutions.

You will want to go HERE, then under 'Items' and click on SB3740 to see attorney Joanne Bregman's testimony in support of this legislation.

The governor signed the legislation on May 27and it became Public Chapter 983.

We want to thank our sponsors, Sen. Dewayne Bunch (R-Cleveland-left) and Rep. Vance Dennis (R-Savannah - right) for being willing to take on this groundbreaking proposal. Most of all I want to acknowledge with deep appreciation the work of my friend, attorney Joanne Bregman, without whose legal expertise, this bill would have never passed. It was Joanne who did the extensive research and prepared to answer the questions of the other lawyers in the General Assembly, responded to the TN Bar Association, testified before committee and before the Judicial Council. THANK YOU to everyone who contacted his or her legislator. We finally received the fruit of our labor and it was worth it all!!

ï¿½        apply a standard consistent with the Restatement 3rd on Foreign Relations Law of the U.S. with regard to enforcement of a foreign nation judgment

ï¿½        protect against unknowing or unintentional waiver of constitutional protections

ï¿½        not to interfere with federal law or international treaties.

This bill will not prevent the enforcement of foreign nation judgments that are unrelated to our constitutional protections. However, in instances where a judgment from a foreign nation's court under a legal system that does not recognize these rights, Tennessee courts will first have to consider whether the judgment can be enforced in light of any constitutional rights violations.

This bill does not apply to corporations, partnerships or other forms of business associations.

Why we need this bill:

The Legislature has already proscribed certain contracts and choice of law provisions as against public policy but not in the context presented by this bill. This bill ensures that in supporting the freedom to contract, the court will ensure that any waiver of fundamental constitutional rights is a knowing waiver.

Neither the Tennessee Code nor the Tennessee Uniform Enforcement of Foreign Judgments Act address laws, legal systems or judgments that are otherwise not entitled to full faith and credit. As such, courts are left to "guess" whether and how to decide these cases. With regard to constitutional protections, the Legislature should clarify the public policy since one of the exceptions to enforcing judgments from foreign countries is contradiction to a state's public policy.