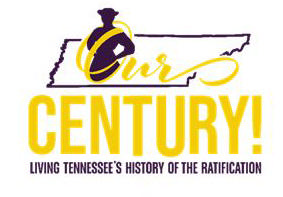 Our Century! Living Tennessee’s History of the Ratification” to take place on August 18 at 9:30 a.m. CT/10:30 a.m. ET and be live-streamed from the State Capitol

The State of Tennessee will commemorate its role in the Ratification of the 19th Amendment, which occurred 100 years ago and guaranteed the right to vote for women throughout the United States, with a reenactment of the historic and close vote. The reenactment event on August 18, titled “Our Century! Living Tennessee’s History of the Ratification,” will take place on the floor of the House chamber at the State Capitol – the same day and place it did a century ago – and be live-streamed beginning at 9:30 a.m. CT/10:30 a.m. ET via the TNWoman100 Facebook page and YouTube page, as well as the Facebook pages of the Tennessee State Library and Archives, Tennessee State Museum, Tennessee State Parks, and Tennessee Historical Society. TNWoman100.com is the website of The Official Committee of the State of Tennessee Woman Suffrage Centennial. Creative Communications, LLC with TNDV Television, Inc. will produce the reenactment. Funding support is provided by the AT&T Foundation.

The live stream will be hosted by Mac Pirkle, Founder and CEO of Creative Communications, LLC and Demetria Kalodimos, broadcast journalist and filmmaker best known for her years as the nightly news anchor on WSMV in Nashville. Members of the 1920 House of Representatives will be portrayed by both current members of the Tennessee General Assembly and local actors working from a script created in consultation with The Official Committee. The livestream will be archived and available for future viewing.

“Our hope is Tennesseans throughout the state, especially educators and school aged children, will tune in to this historic occasion to commemorate a moment in Tennessee’s history that affected the lives of millions of women throughout the country,” said The Official Committee of the State of Tennessee Woman Suffrage Centennial. “Tennesseans can be very proud of what was accomplished in our century 100 years ago, not only by those legislators that voted “aye” for suffrage, but by the many women in our state, and throughout the nation, who fought hard for decades to make it a reality.”

The 19th Amendment, also known as the Susan B. Anthony Amendment, passed the U.S. House and Senate on June 4, 1919, and was sent to the states for ratification. To become part of the U.S. Constitution, the Amendment needed to be approved by 36 of the then 48 states. By the summer of 1920, 35 of the 36 states needed for ratification had approved the amendment. Eight states had rejected the amendment; five had not voted. Suffragists saw Tennessee as their last, best hope for ratification before the 1920 presidential election. On August 9, Governor Albert H. Roberts called a special session of the Tennessee General Assembly to consider the issue. Suffragists and anti-suffragists descended on Nashville.

In what became known as Tennessee’s War of the Roses, pro-suffrage activists wore yellow roses as a symbol of support, in stark contrast to the red roses of the opposition. Fierce lobbying commenced on both sides of the issue, but the resolution passed easily in the Tennessee State Senate. Now women lobbied furiously to secure votes in the House of Representatives where the vote was extremely close, and created an even split among Tennessee state representatives.

On August 18, 1920, suffragists and anti-suffragists packed the public galleries in the House chamber for its vote. Members and spectators wore yellow or red roses, reflecting their stance. The atmosphere was tense.

The Speaker of the House, Seth Walker of Lebanon, served as the anti-suffrage leader although he had previously advocated for suffrage. Joseph Hanover of Memphis led the suffrage cause in the House. After Seth Walker tried unsuccessfully to table the amendment, which would have effectively “killed” the bill, the House was required to vote on the 19th Amendment. As the roll call began and votes were tallied, the youngest member of the House, 24-year old Harry Burn of Niota, faced a dilemma. In his coat pocket sat a 7-page letter from Febb Ensminger Burn, his mother. Among general news of the family farm, Febb used the letter to persuade her son to change his anti-suffrage stance, writing “hurrah and vote for suffrage!” As Burn’s name approached for roll call, the young man, sporting a red anti-suffrage rose, shocked the chamber by claiming “aye” for the amendment, thus breaking a tie and changing the course of history. Secretary of State Bainbridge Colby certified the ratification on August 26, 1920.

The Tennessee State Capitol, where the reenactment will take place on August 18, is one of the oldest working capitols in the United States. Designed by noted architect William Strickland, who considered it his crowning achievement, it stands today much as it did when it first opened in 1859. One of 12 state capitols that does not have a dome, it was added to the National Register of Historic Places in 1970 and named a National Historic Landmark in 1971. Tennessee State Capitol serves as home of the Tennessee General Assembly and houses the governor’s office.