Economy
'Perpetuate this inequality': Ilhan Omar says US must begin 'dismantling' economy and 'the whole system of oppression'

Rep. Ilhan Omar advocated for the "dismantling" of the U.S. economy and its political system during a speech on Tuesday.

"As long as our economy and political systems prioritize profit without considering who is profiting, who is being shut out, we will perpetuate this inequality," Omar, a Democrat, said. "So, we cannot stop at [the] criminal justice system. We must begin the work of dismantling the whole system of oppression wherever we find it.”

An outspoken promoter of the Black Lives Matter movement, Omar has repeatedly called for systematic change to law enforcement, housing, and healthcare systems.

"I will never stop saying: Not only do we need to disinvest from police, but we need to completely dismantle the Minneapolis Police Department," Omar, a representative for the district that covers the city of Minneapolis, said at a rally last month. "The Minneapolis Police Department is rotten to the root. And so, when we dismantle it, we get rid of that cancer, and we allow for something beautiful to arise, and that reimagining allows us to figure out what public safety looks like for us."

A member of "the Squad," Omar has aligned herself politically with fellow Democrats such as Reps. Alexandria Ocasio-Cortez and Rashida Tlaib, who have railed against capitalism as a system of oppression used by the rich against the poor.

Similarly, Black Lives Matter organizers, who are upset with the continued mistreatment of minorities by police and a lack of meaningful action on the part of the government to rectify unequal justice, have threatened to "burn down" the current system of government if elected leaders do not comply with their demands.

"I said if this country doesn’t give us what we want, then we will burn down the system and replace it. All right? And I could be speaking figuratively. I could be speaking literally," said Hawk Newsome, a co-founder of Greater New York Black Lives Matter. "It’s a matter of interpretation."

President Trump has labeled Black Lives Matter as a group with a "hateful" message and threatened to crack down on demonstrations he says unfairly target American ideals and symbols.

"Make no mistake: This left-wing cultural revolution is designed to overthrow the American Revolution. In so doing, they would destroy the very civilization that rescued billions from poverty, disease, violence, and hunger and that lifted humanity to new heights of achievement, discovery, and progress," Trump said during a speech over the July 4 weekend. "To make this possible, they are determined to tear down every statue, symbol, and memory of our national heritage." 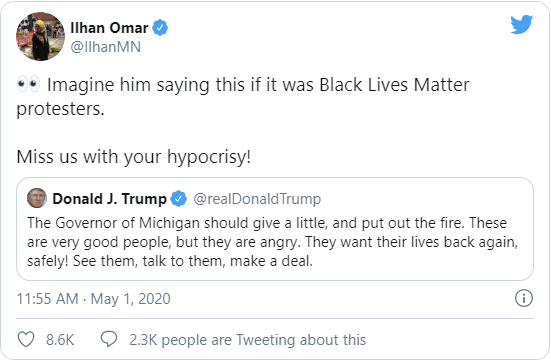 Omar has called Trump a racist and a liar since being elected to Congress as part of the blue wave in 2018.

"Imagine him saying this if it was Black Lives Matter protesters," Omar said in reaction to Trump's comments urging the Democratic governor of Michigan to listen to and work with citizens upset with coronavirus lockdown measures. "Miss us with your hypocrisy!"

FOR MORE INFORMATION, VIEW VIDEO AND SEE OTHER ARTICLES