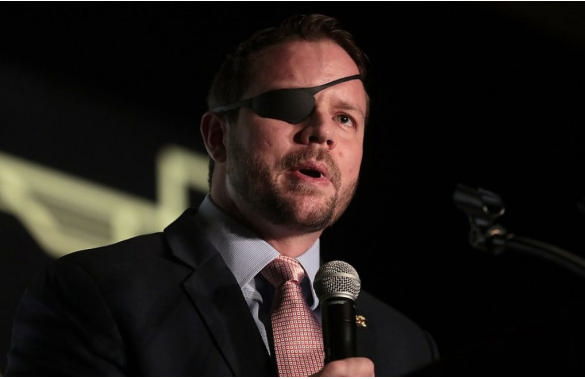 The legislators, both combat vets, have an idea on how to make the Chicoms pay for their virus duplicity.

GOP Rep. Dan Crenshaw of Texas is a combat-decorated former Navy SEAL. GOP Senator Tom Cotton is a decorated Army combat vet. They both are on the short list for 2024, along with Nikki Haley, Mike Pence, John Thune, Kristi Noem, and Greg Abbott.

But Crenshaw and Cotton have given themselves some leg room by coming up with a plan to sate a particular American thirst right now. They know how to make the Chinese pay a big price for what they have done to this country over the coronavirus. Simply, both men want people to be able to sue the Chinese in court. Absurd? Would it mean a flood of lawsuits that would be so big the court system couldn’t respond? Hear them out…

From an op-ed Crenshaw and Cotton wrote for Fox News: “It’s clear the Chinese Communist Party is to blame for the coronavirus pandemic that’s killing thousands of our fellow citizens every day. Late last week we introduced legislation that would hold the party accountable for the physical and economic injury it has inflicted on millions of Americans. Our legislation is simple but effective. It would allow Americans to sue China in U.S. federal courts in order to ‘recover damages for death, injury, and economic harm caused’ by China’s reckless and reprehensible response to the COVID-19 outbreak.”

They continue, “Americans are currently barred from filing such claims under the Foreign Sovereign Immunities Act, which forbids lawsuits against foreign sovereign nations, save in rare instances. Our legislation would carve out a limited exception for physical and economic injuries resulting from COVID-19 and acts ‘intended to deliberately conceal or distort the nature or existence of COVID-19.’”

What about the claim the courts would be sunk under the burden of all the lawsuits?

“Others may argue that our bill would inundate federal courts with claims. This is a reasonable concern, insofar as millions of Americans have been harmed by the Chinese Communist Party’s actions. This is why our legislation channels all associated claims to just four federal district courts and one federal appellate court that have proven they are capable of managing large caseloads. Limiting jurisdiction in this way will ensure more consistent adjudication across the board, relieve potential pressure on state courts, and avoid a ‘patchwork’ of outcomes that favor some plaintiffs while disadvantaging others.”

It is an idea whose time has come. Watch for a debate on it (with Democrats opposing) coming up soon.