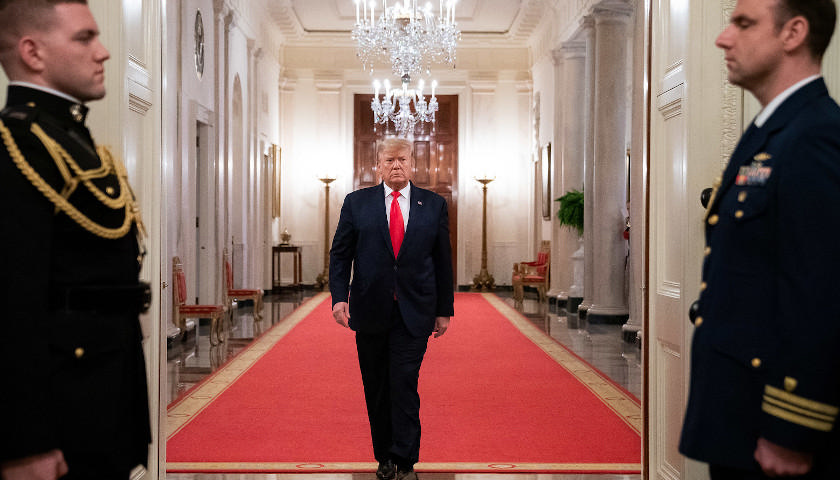 Republic
Commentary: The Ruling Class Will Continue to Come After President Trump

Some conservatives, rejoicing that impeachment turned into yet another of #TheResistance’s political train wrecks and that President Trump is likely to be reelected by a bigger margin than in 2016, expect that a chastened ruling class will return to respecting the rest of us. They are mistaken.

Nor was their intolerance so much a choice as it was the expression of its growing sense of its own separate identity, of power and of entitlement to power. The halfhearted defenses with which the offensives of the ruling class have been met already advertise the fact that it need not and will not accept the outcome of any presidential election it does not win. Trump notwithstanding, this class will rule henceforth as it has in the past three years. So long as its hold on American institutions continues to grow, and they retain millions of clients, elections won’t really matter.

Our country is in a state of revolution, irreversibly, because society’s most influential people have retreated into moral autarchy, have seceded from America’s constitutional order, and because they browbeat their socio-political adversaries instead of trying to persuade them. Theirs is not a choice that can be reversed. It is a change in the character of millions of people.

The sooner conservatives realize that the Republic established between 1776 and 1789—the America we knew and loved—cannot return, the more fruitfully we will be able to manage the revolution’s clear and present challenges to ourselves. How are we to deal with a ruling class that insists on ruling—elections and generally applicable rules notwithstanding—because it regards us as lesser beings?

The resistance that reached its public peaks in the Brett Kavanaugh hearings and the impeachment imbroglio should have left no doubt about the socio-political arbitrariness that flows from the ruling class’s moral autarchy, about the socio-political power of the ruling class we’re forced to confront, or of its immediate threat to our freedom of speech.

Chief Justice John Roberts, presiding over the Senate’s impeachment trial, was as clear an example as any of that moral autarchy and its grip on institutions.

Pursuant to Senate rules, Senator Rand Paul sent a written question through Roberts to House Manager Adam Schiff (D-Calif.) regarding the extent of collaboration between Schiff’s staffer Sean Misko and his longtime fellow partisan, CIA officer Eric Ciaramella in starting the charges that led to impeachment. Roberts, having read the question to himself, declared: “The presiding officer declines to read the question as submitted.”

The chief justice of the United States, freedom of speech’s guardian-in-chief, gave no reason for declining to read Paul’s question. The question was relevant to the proceedings. It violated no laws, no regulations. The names of the two persons were known to every member of the House and Senate, as well as to everyone around the globe who had followed news reports over the previous months. But the Democratic Party had been campaigning to drive from public discussion that this impeachment stemmed from the partisan collaboration between a CIA officer and a Democratic staffer.

Accordingly, the mainstream media had informally but totally banned discussion of this fact, supremely relevant but supremely embarrassing to Schiff in particular and to Democrats in general. Now, Paul was asking Schiff officially to comment on the relationship. Schiff could have explained it, or refused to explain it. But Roberts saved him the embarrassment and trouble—and Senate Majority Leader Mitch McConnell (R-Ky.) spared senators the problem of voting on a challenge to Roberts’ ruling. The curtain of official concealment, what the Mafia calls the omertà, remained intact. Why no reason?

Just as no dog wags his tail without a reason, neither did Roberts wag his without reason. Neither the laws of the United States nor the rules of the Senate told the presiding officer to suppress the senator’s question. Why was Roberts pleased to please those he pleased and to displease those he displeased? In short, why did this impartial presiding officer act as a man partial to one side against the other?

This professional judge could hardly have been impressed by the ruling class’s chosen instrument, Adam Schiff, or by Schiff’s superior regard for legal procedure. Since Schiff’s prosecution featured hiding the identity of the original accuser—after promising to feature his testimony—and since it featured secret depositions, blocked any cross-examination of its own witnesses, and prevented the defense from calling any of their own, it would have been strange if Chief Justice Roberts’ bias was a professional one.

Is it possible that Roberts favored the substance of the ruling class claim that neither President Trump nor any of his defenders have any right to focus public attention on the Biden family’s use of public office to obtain money in exchange for influence? That, after all, is what Washington is largely about. Could Roberts also love corruption so much as to help conceal it? No.

Roberts’ professional and ethical instincts incline him the other way. Nevertheless, he sustained the ruling class’s arbitrariness. Whose side did he take? His dinner companions’ side? The media’s? His wife’s? Roberts’ behavior—contrary as it was to his profession, to his morals, and to his political provenance—shows how great is the ruling class’s centripetal force.

The sad but inescapable consequence of this force is that conservatives have no choice but to follow the partisan logic of revolution—fully conscious of the danger that partisanship can make us as ridiculously dishonest as Adam Schiff or CNN’s talking heads, into rank-pullers like John Roberts, and into profiteers as much as any member of the Biden family.

And yet, revolution is war, the proximate objective of which is to hurt the other side until it loses the capacity and the will to do us harm. That means treating institutions and people from the standpoint of our own adversarial interest: controlling what we can either for our own use or for bargaining purposes, discrediting and abandoning what we cannot take from our enemies.

Unlike our enemies, our ultimate objective is, as Lincoln said, “peace among ourselves and with all nations.” But what kind of peace we may get depends on the extent to which we may compel our enemies to leave us in peace. And for that, we must do unto them more and before they do unto us.

Angelo M. Codevilla is a senior fellow of the Claremont Institute, professor emeritus of international relations at Boston University and the author of To Make And Keep Peace (Hoover Institution Press, 2014).