NEWS
‹‹ Why We Are a Republic, Not a Democracy
Immigration Will Shift Electoral College in Favor of Democrats, Study Finds ›› 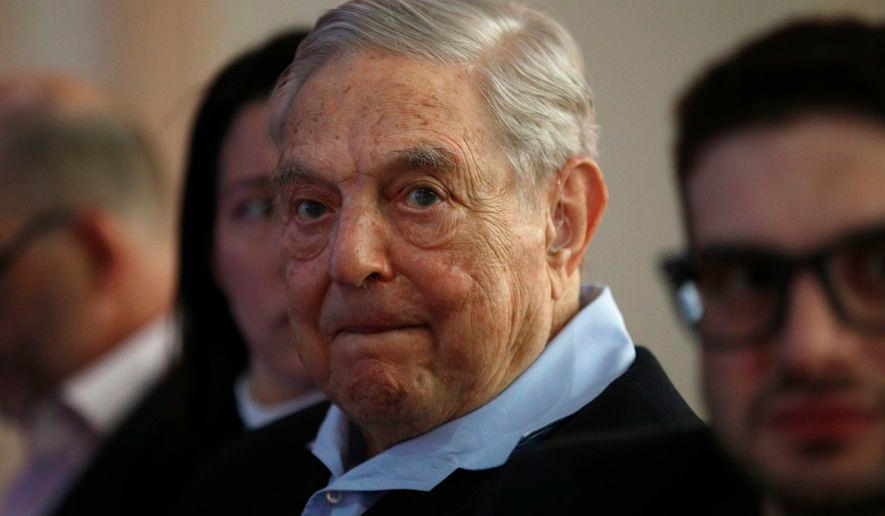 A new video from the American Association of Evangelicals reveals how George Soros, through his many funding ventures, has been busily infiltrating the Christian base in America to divide, and ultimately conquer, the religious minded within the Republican Party.

Truly, with the left, political wars know no bounds. Nothing’s sacred; not when it comes to the leftists’ drive to succeed.

Here’s what AAE put out in a press release: “Democrat ministers Rev. Jim Wallis and allies are now touring many states on ‘Vote Common Good’ buses to … split the evangelical vote before the mid-term elections. The AAE video features the newly released voice recording of [Jim] Wallis of Sojourners as he publicly denied that he was a recipient of Soros funding.”

“Soros Funding of Sojourners Is Only the Tip of the Iceberg,” wrote National Review in August of 2010.

“George Soros Funding Jim Wallis and Sojourners,” wrote Crisis Magazine that same month and year, which went on to report: “The funding from Soros’s foundation, The Open Society, was revealed by Marvin Olasky in World magazine.”

‘Lest the significance goes unrecognized: The Sojourners is a far-left group that masquerades as a Christian outlet, bent on doing God’s work, but that far more often seems to do nothing but Democrats’ will.

“We are evangelicals, Catholics, Pentecostals and Protestants; progressives and conservatives; blacks, whites, Latinos, and Asians; women and men; young and old … [and] seek to discover the intersection of faith, politics, and culture,” Sojo.net reads.

Sounds honorable enough. But how come that intersection never leads down a conservative path?

The organization’s magazine puts out such thoughts as this: “No Wall Between Amigos.” And this: “Conservative Court-Packing Isn’t About Abortion — It’s About Culture: If the Right really cares about abortion, they should reduce poverty.” And this: “In the Midst of a Political Emergency: The administration is threatening the soul of this nation.”

There’s nothing pro-Donald Trump, pro-conservative, pro-limited government, pro-Constitution about this group’s goals — or, for that matter, about the Vote Common Good bus tour, currently winding through 31 cities of America.

Vote Common Good executive director Doug Pagitt, who’s also profiled on the Sojourners’ Internet site as a mover and shaker in bringing about “a more generous Christian conversation,” said during a recent Washington Journal appearance on C-SPAN that “we believe the Trump administration needs to be restrained” and that he simply wants Americans to “consider the common good when they vote.” Not the Constitution? Hmm.

What’s going on here is not so much Christianity as it is partisan politicking under cover of religious teaching. It’s the furtherance of a George Soros style of progressivism, but cloaked in Christianity — and backed by George Soros bucks — and made all the worse by the initial denials of the George Soros ties.

Wallis ultimately admitted the Sojourners received money from Soros-tied groups. Pagitt, when asked on C-SPAN about Vote Common Good’s sources of funding, ducked and racked it up to “private donations,” before spinning the conversation off rapidly in a public relations direction.

But isn’t truth a core concept of Christianity?

If there’s nothing to hide — if the Sojourners and the Vote Common Good bus tour and all this so-called Christian political activity is really aimed at doing Christian works — why not blare forth the sources of funding? Why not shed the light on the behind-scenes influencers?

“Americans hate manipulation,” said AAE spokesperson Kelly Monroe Kullberg, in a statement. “Anti-American globalists like Soros are funding a growth industry of paid anarchists and political activists to divide and weaken America, including the Church.”

Christians, beware. Patriots, be on guard.

Anyone can toss down a Christian card, even an atheist. But a clue to identify an anti-American enemy is the wolves always want Big Government, bigger government, a more powerful centralized system with weakened rights for the individual — and if it’s secret Soros dollars and Bible-thumping that gets them there, so be it.

• Cheryl Chumley can be reached at cchumley@washingtontimes.com or on Twitter, @ckchumley.