NEWS
‹‹ Rep. Mark Green: Want to save America? Embracing this gift from the Founders is the only way
In Case You Missed It : Christmas is About Jesus, the Birth of the Christ ››

The 2015 law requires women seeking an abortion to wait 48-hours between receiving in-person counseling from a doctor and returning to a clinic for an abortion.

Five abortion clinics filed suit shortly after law was enacted, but the case did not go to trial until September. Both sides submitted final written conclusions late last month. Senior Judge Bernard Friedman, a Michigan judge appointed to preside over the case, has no set timetable for issuing his ruling.

The clinics challenging the law claim it places an undue burden on those seeking abortions, the standard set by the U.S. Supreme Court in 1992 when it upheld a 24-hour waiting period in Pennsylvania while rejecting a requirement women obtain consent of their husbands for an abortion.

The legal challenge also alleges the law discriminates against women.

"It is especially burdensome for low-income who make up the large majority of Plaintiff's patients; those who live far from a clinic and must travel significant distances to receive care; victims of intimate partner violence and sexual assault; and women who seek abortions because of a fetal anomaly or concerns for their own health."

Lawyers with Tennessee's office of Attorney General who are defending the measure said the waiting period "helps to ensure that abortion decisions are made knowingly, competently and voluntarily."

Tennessee is one of 27 states that have enacted a waiting period for women seeking an abortion. 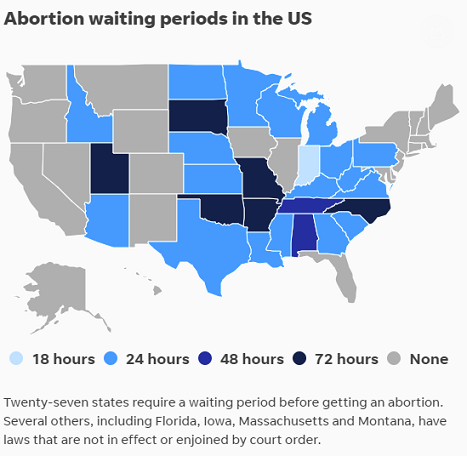 Since the waiting period was enacted, the number of abortions obtained by women in Tennessee has dropped by 12%, from 9,861 in 2014 to 8,636 in 2017, the most recent data available from the Tennessee health department.

By 2017, fewer than 20% of abortions were obtained before seven weeks while the rate of abortions at 15 or 16 weeks of gestation weeks tripled.