NEWS
‹‹ Mom loses custody battle after trying to transition her 7-year-old son into a girl
In Georgia, Parents Win Battle Over Transgender Bathrooms at School ›› 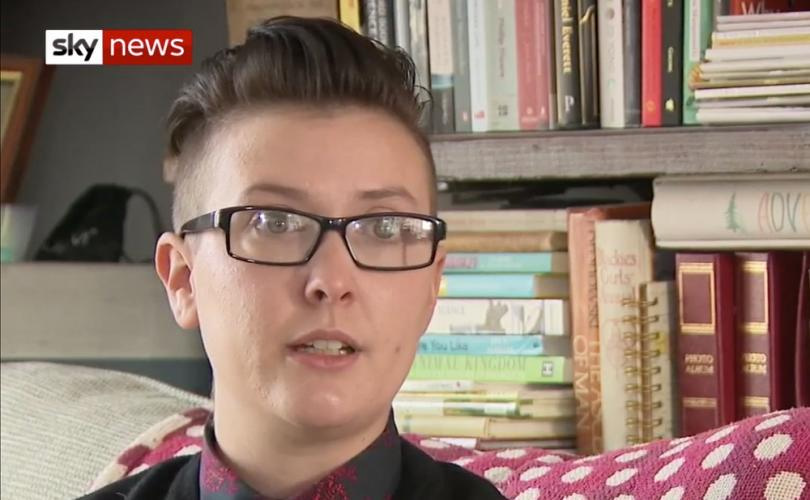 MANCHESTER, England, December 2, 2019 (LifeSiteNews) ― A crowd of 200 people turned out for the world’s first gender detransition conference on Saturday afternoon.

“Detransition: The Elephant in the Room. Medical Ethics in the Age of Gender Identity” was held in Manchester, England on November 30. Organized by an independent feminist collective called “Make More Noise”, the sold-out event included a panel of medical and psychological health experts as well as young women who are “detransitioning” from attempts to make them men.

The event also marked the official launch of the Detransition Advocacy Network headed by Charlie Evans, 28, a woman who identified as a man for a decade. Evans decided to found the group to help the hundreds of young people she says have reached out to her after regretting their own experiments with hormonal treatments and surgeries.

The two-hour meeting was live-tweeted by the “Safe Schools Alliance UK,” a lobby group that seeks to ensure the safeguarding of children in schools, which includes protecting girls’ bodily privacy from males and all children from pressure to consider themselves transgender.

According to the Safe Schools Alliance UK, the meeting began with remarks by Evans, who stated, “We are not motivated by hate. We are motivated by solidarity, sisterhood, and a strong sense of justice.” Evans was followed by a female “detransitioner” named Max, who said her attempts to become male were about “escaping lesbophobia and male harassment.”

Another detransitioner, Kira, said she had been a “gender nonconformist child” (tomboy) until she began to feel social pressure to conform to femininity. Kira began hormone therapy and had a double mastectomy at 20. She came to realize, however, that these treatments were not evidence of self-acceptance.

“How can I possibly be loving myself if I am sacrificing my general health in order to change my whole being?” she asked.

The experts who spoke included Dr. David Bell, a consultant psychiatrist in the Adult Department of London’s Tavistock Centre, where the Gender Identity Development Service for children can be found. Bell said he doesn’t believe that gender “reassignment” clinics do follow-up checks on their patients. He also remarked that the term “puberty blockers” for the powerful drugs given to children to delay the onset of puberty is “misleading”. Bell believes that the drugs probably have physiological consequences beyond delaying puberty.

“The lack of long term evidence is the biggest issue in this field,” he said.

Fear of being labelled “transphobic” seemed to resonate with the audience. According to the Safe Schools Alliance UK member live-tweeting the meeting, a medical professional on the floor described being silenced.

“We are advised against using the terms ‘detransition’ and ‘desisters’,” he said and noted that this worries him.

A psychologist in the audience expressed concern about the ‘affirmation-only model’ which, the Safe Schools Alliance UK member noted, “advocates immediate social transition for gender-questioning children.”

Still another audience member voiced concern that gender ideology sounds like “old school sexism”, and Dr. Bell replied by saying he had observed a “caricaturing of gender stereotypes” through transition.

The issue of girls feeling that girls are supposed to follow a narrow concept of femininity or “transition” into men appeared again when a panel of young women who are now “detransitioning” from their attempts to be men discussed their experiences. One young woman, called Ellie, said she had lacked role models of “masculine” females.

Another issue that arose was the young women’s discomfort with their adolescent same-sex attractions.

The “detransitioning” women differed in their levels of regret over the invasive procedures they received. One woman feels that her mastectomy relieved her gender dysphoria, but one was scathing over the treatment she had received.

“What the hell are surgeons doing, calling this gender reassignment and gender-reaffirming health care? Because my body doesn’t feel healthy anymore,” she said.

This 23-year-old woman, who apparently spoke anonymously, had had a double mastectomy, hysterectomy, and an oophorectomy (removal of ovaries) before she realized that she would never become male.

“I’m sorry: I just can’t believe it anymore,” she told the audience.

According to Safe Schools Alliance UK, a male audience member was clearly upset when he told the young panellists that their testimony should be widely heard.

“I was 30 before I was happy with myself,” he said. “People have done this to you and allowed this to go on.”

“You say where do we need a platform next?” he continued. “You need it everywhere.”

11-Aug-2020
The First Day of Special Session Reveals Legislation That Will be Considered Regarding COVID-19 Liability, Telemedicine and Protesting 10-Aug-2020
Pastor Ed Young says it's 'critical' churches reopen despite COVID-19 7-Aug-2020
Giuliani: Black Lives Matter 'Is This Close' to Getting Designated a 'Domestic Terrorist Organization'

11-Aug-2020
The First Day of Special Session Reveals Legislation That Will be Considered Regarding COVID-19 Liability, Telemedicine and Protesting 10-Aug-2020
Pastor Ed Young says it's 'critical' churches reopen despite COVID-19 7-Aug-2020
Giuliani: Black Lives Matter 'Is This Close' to Getting Designated a 'Domestic Terrorist Organization'