NEWS
‹‹ Sorry If You’re Offended, but Socialism Leads to Misery and Destitution
Socialism, Not Climate Change, Is the Real Threat ›› 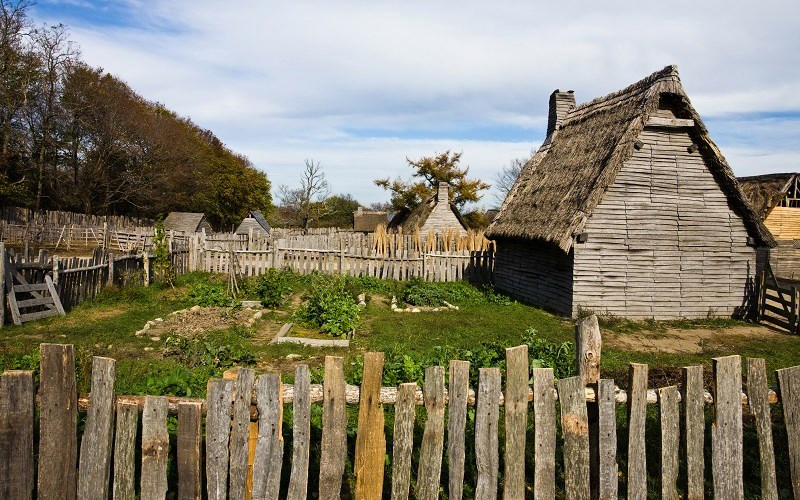 Socialism
The Pilgrims Tried Socialism – It Did Not Work

When we point out that neither socialism nor communism has ever worked, their supporters simply smile indulgently and say, “Well, that’s just because the right people haven’t tried it yet.”

On that count, they are just plain wrong. Communism (or socialism, whichever term you prefer) had its purest test in the earliest days of American history and was an abysmal, abject, utter failure. And it was tried by a small group of people who were committed to each other, devoted to God, and were hard-working and industrious. As William Bradford said, this was an experiment tried by “good and honest men.” If this crew couldn’t make it work, nobody’s ever going to make it work.

Our Pilgrim forefathers landed near Plymouth Rock in the fall of 1620. They left England aiming for the Virginia colony, but were blown off course and landed in Massachusetts instead. Left on their own, they established their own form of government and their own economy.

The form of government they established is enshrined in the Mayflower Compact, which was the first constitution in America established by the consent of the governed. It thus became the model for our federal Constitution and for the constitutions of the individual 50 states.

Here’s how the Mayflower Compact began (language modernized, emphasis mine throughout):

In the name of God, Amen. We whose names are underwritten, the loyal subjects of our dread sovereign Lord, King James...having undertaken, for the glory of God, and advancement of the Christian faith, and honor of our king and country, a voyage to plant the first colony in the Northern parts of Virginia...

In the presence of God, and one of another, covenant & combine our selves together into a civil body politic...to enact...just & equal laws...as shall be thought most meet & convenient for the general good of the Colony, unto which we promise all due submission and obedience...

In witness whereof we have hereunder subscribed our names at Cape Cod the 11th of November, 1620 A.D.

It’s worth observing, as data points in the conversation about whether the United States was founded as a Christian nation, the frequent references to God and the explicit reference to the ultimate purpose of the colony being to promote and to advance the Christian faith in parts unknown. God’s calling on America (a column for another day) is to fulfill the Great Commission of Christ, “to make disciples of all nations” (Matthew 28:19). The Plymouth Colony was committed to doing its part and set this noble goal for all settlers who were to follow them to our shores.

Not only did they establish their own form of government - essentially a constitutional republic - but their own economy as well. As a “company” colony, Plymouth Plantation operated under bylaws established by the Virginia Company of London.

These bylaws set up a communal system for the Pilgrims, in which all capital and all profits for the first seven years were to remain in “the common stock.” There was no such thing as private property; all property and all business activities belonged to the collective with none of it belonging to individuals or individual families.

During these seven years, “all profits & benefits that are got by trade, traffic, trucking, working, fishing, or any other means of any person or persons remain still in the common stock.” Everyone was “to have their meat, drink, apparel, and all provision of the common stock and goods.”

Then, in this utopian scheme, at the end of seven years “the capital & profits, viz. the houses, lands, goods and chattels, be equally divided betwixt the adventurers and the planters.”

It, just as communism does today, sounded ideal and noble and well, Christian. It would be share and share alike, everyone putting aside his own aspirations for the accumulation of wealth and property in order to selflessly devote all his energies and talents to the common good.

But it wasn’t ideal or noble, or even Christian. It was Marxism before Marx, and like all socialistic and communistic systems, due for an agonizing and spirit-crushing collapse.

Governor William Bradford, in Of Plymouth Plantation, did not hesitate to describe the experiment as a “failure.” And he made it clear that the failure was not in the people but in the system. "The failure of that experiment of communal service, which was tried for several years, and by good and honest men, proves the emptiness of the theory of Plato and other ancients, applauded by some of later times,- that the taking away of private property, and the possession of it in community, by a commonwealth, would make a state happy and flourishing; as if they were wiser than God...”

Communism, in other words, was a display of arrogance and human conceit, for it was predicated on the silly belief that man knows better than God. God condemns theft in the 8th Commandment. Appropriating property from the productive and distributing it to the non-productive by government coercion is theft under the color of law. And theft is still theft no matter who is doing the thieving.

The result was predictable. Said Bradford:

“...[C]ommunity of property was found to breed much confusion and discontent; and retard much employment which would have been to the general benefit...

“For the young men who were most able and fit for service objected to being forced to spend their time and strength in working for other men's wives and children, without any recompense...

"The strong man or the resourceful man had no more share of food, clothes, etc., than the weak man who was not able to do a quarter the other could. This was thought injustice.

“The aged and graver men, who were ranked and equalized in labor, food, clothes, etc., with the humbler and younger ones, thought it some indignity and disrespect to them.

“As for men's wives who were obliged to do service for other men, such as cooking, washing their clothes, etc., they considered it a kind of slavery, and many husbands would not brook it...”

Hmmm. Except for the “confusion, discontent, injustice, indignity, disrespect, (and slavery)” this experiment produced, it was paradise on earth.

Bradford hastened to explain that if you were looking for the “right people” to implement communism, these were the right people:

“If all were to share alike, and all were to do alike, then all were on an equality throughout, and one was as good as another; and so, if it did not actually abolish those very relations which God himself has set among men, it did at least greatly diminish the mutual respect that is so important should be preserved amongst them.

“Let none argue that this is due to human failing, rather than to this communistic plan of life in itself..."

So, if the “communistic plan of life” was an abysmal failure, what would replace it? Bradford explained that the Pilgrims discovered that capitalism was the answer.

“God in His wisdom saw that another plan of life was fitter for them...

“So they began to consider how to raise more corn, and obtain a better crop than they had done, so that they might not continue to endure the misery of want...

“At length after much debate, the Governor, with the advice of the chief among them, allowed each man to plant corn for his own household...

“So every family was assigned a parcel of land, according to the proportion of their number...

“...This was very successful. It made all hands very industrious, so that much more corn was planted than otherwise would have been by any means the Governor or any other could devise, and saved him a great deal of trouble, and gave far better satisfaction.

“The women now went willing into the field, and took their little ones with them to plant corn, while before they would allege weakness and inability, and to have compelled them would have been thought great tyranny and oppression."

The “communistic plan of life” inevitably requires a more and more powerful state to enforce it, since it runs counter to the very grain of our God-given humanity. Soon, an all-powerful state replaces an all-powerful God as the object of a society’s worship and veneration, and the horrors of a totalitarian state unleavened by the purity of the gospel soon manifest themselves.

In 2017, we passed the 100th anniversary of the Bolshevik Revolution that brought Communists to power in Russia. Similar forms of oppressive, godless states sprang up in China, Vietnam, and North Korea (where a little tinpot dictator threatens the peace and stability of the entire world). Even in Germany, Hitler replaced pictures of Jesus with pictures of himself and drew his power from the occult rather than from Christ.

The human cost has been enormous. The one thing that all godless, totalitarian states share in common is dead bodies. Historians estimate that over 100 million lives have been sacrificed over the last century to the idolatrous god of communism.

So on this Thanksgiving, let’s include a word of gratitude for our Pilgrim forefathers, who saw “beyond the years...alabaster cites gleam(ing), undimmed by human tears.”

And let’s join in prayer on this Thanksgiving Day that God will once again shed his grace on us, and crown our good with brotherhood from sea to shining sea.

(Note: This column is a revision of a column first published in November, 2017.)

The author may be contacted at bfischer@afa.net