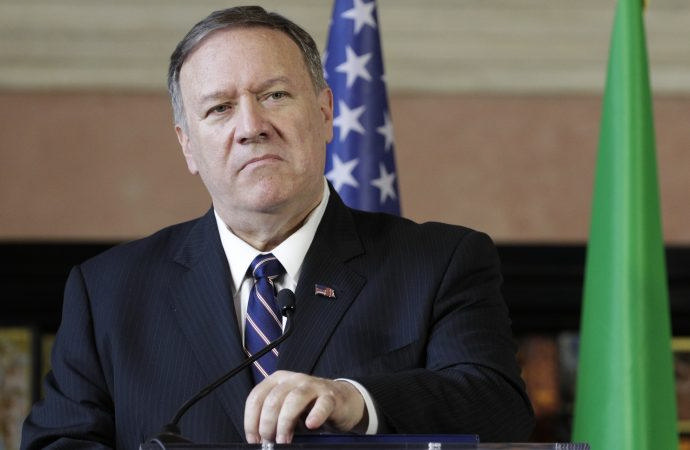 NASHVILLE, Tennessee - U.S. Secretary of State Mike Pompeo on Friday continued to raise the alarm about religious freedoms around the world, receiving a warm welcome in Tennessee as his department faced heightened scrutiny amid the impeachment inquiry into President Donald Trump.

The top U.S. diplomat said in a speech to a Christian group in Nashville that 80% of the world lives in areas where people are denied religious freedom.

“This is not a popular conversation to raise sometimes, but the world needs to hear this truth,” Pompeo said.

Pompeo delivered the remarks the same day a former special envoy for Ukraine was set to be interviewed in the impeachment probe. Pompeo did not refer to the impeachment inquiry directly, but joked at the start of his speech that it was “a heck of a day to be out of Washington.”

Pompeo also made no mention of this week’s Turkish offensive against U.S.-allied Kurdish fighters in northern Syria. Nashville has the largest Kurd population in the U.S. and Trump’s recent decision to withdraw U.S. troops from northern Syria, leaving Kurds there vulnerable to Turkish attack, has sparked protests among Kurds in places including Nashville.

Separately, hundreds of Kurds and supporters protested Friday outside a downtown federal courthouse in Nashville, holding flags and urging peace just several hours after Pompeo’s speech. The city is home to an estimated 15,000 Kurds.

On Friday, Pompeo instead highlighted his Christian leadership during his time overseeing the State Department.

In a nearly 20-minute speech, Pompeo described the Islamic Republican Iran as an “aggressor not a victim,” and singled out China for holding Muslim Uighurs in internment camps, as well as calling out Iran for the persecution of Christians.

Pompeo said the Trump administration has prioritized the issue in discussions with world leaders and by recently hosting a conference in Washington on the matter.

Still, he said, “there’s so much more world to do.”

Critics have recently accused the administration of being selective as it stands up for religious freedom, noting that it has made it harder for Muslims to enter the United States and appears to tolerate persecution in close allies such as Saudi Arabia.

Still, Pompeo repeated that Trump’s administration had sought out the truth in its defense of religious freedom.

The biggest applause from the speech, however, came after Pompeo vowed his department would never sign an agreement with an international organization that declared abortion as a human right.