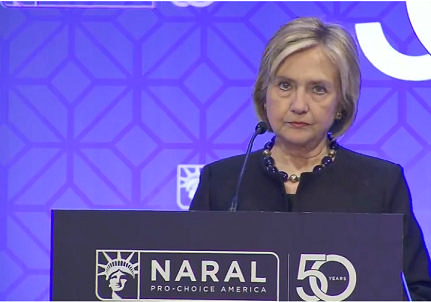 In between criticisms of President Donald Trump, leaders of the radical pro-abortion group called Clinton “our president” and touted her pro-abortion record. NARAL held its 50th anniversary celebration Thursday in Washington, D.C.

“Women’s rights are human rights, and for 50 years NARAL has taken on the toughest fights to protect our most fundamental freedoms. Happy anniversary. Let’s keep going,” Clinton wrote on Twitter after accepting the award.

During her acceptance speech, Clinton spent a lot of time criticizing Trump, who has taken strong steps to protect human rights for both the born and unborn. Among his many actions, the president cut taxpayer funding to abortion providers, urged countries to stand together against the United Nation’s abortion agenda, and defended the conscience protection rights of pro-life medical workers.

In contrast, Clinton, who lost to Trump in 2016, campaigned on supporting third-trimester abortions and forcing taxpayers to fund them.

On Thursday, she slammed Trump as a “danger” to the future of America and urged Democrats in Congress to impeach him, according to Bloomberg.

“This current occupant of the Oval Office poses a clear and present danger to our future, to our democracy,” Clinton said. Trump “has betrayed his oath of office to uphold the Constitution and protect and defend our country.”

For her commitment to the cause of killing unborn babies, NARAL leader Ilyse Hogue praised Clinton and called her “our president.”

“She will always be my president,” Hogue said.

NARAL is a radical pro-abortion group that boasts 2.5 million supporters. It lobbies against moderate, common-sense abortion regulations, including bans on discriminatory sex-selection abortions, parental consent laws for minors and protections for newborns who survive abortions.

NARAL even opposes legislation that provides justice to mothers whose unborn babies die as a result of violent crimes. And though the group claims to be pro-choice, it attacks nonprofits that provide support to women who choose life for their babies.

Pro-life advocates long have known that NARAL was formed based on lies. One of its founders, an abortionist named Dr. Bernard Nathanson, later left the group and became pro-life after watching an unborn baby be aborted on an ultrasound screen.

After his conversion, he admitted that NARAL lied when it was campaigning to legalize abortions across the country.

“We spoke of 5,000 – 10,000 [back alley abortion] deaths a year,” Nathanson said. “I confess that I knew the figures were totally false … it was a useful figure, widely accepted, so why go out of our way to correct it with honest statistics?”

Surprisingly, the liberal Washington Post confirmed the lie in a fact check earlier this year.