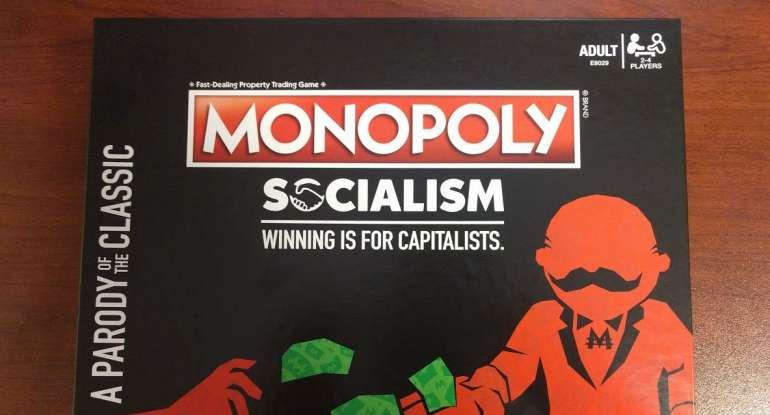 Socialism
Hasbro Has a New 'Monopoly: Socialism' Game and Socialists Are Not Happy

A few weeks ago, my wife and I took a deep breath and then reluctantly replied "sure" to our kids' request that we play Monopoly for family game night. As most of us can attest, Monopoly requires a level of commitment that no family game night should require, and it's not really that fun to begin with. Hasbro's new "Monopoly: Socialism," though, sounds like a hoot and a great way to continue to teach my kids why socialism is for the math-, economics-, and history-challenged among us.

Sadly, I have been completely unaware of this new game that mocks socialism as only a brilliant capitalist company can. It was only after stumbling across a Twitter thread composed by a deeply offended socialist that "Monopoly: Socialism" entered my consciousness. So, thank you, Twitter and upset socialist dude.

Since I apparently harbor some socialist tendencies in my own heart, I want to share this with you. Of course, the capitalist in me recognizes that I will be helping a business make money on the free market. Maybe I should submit Hasbro a bill for my advertising services. Frankly, I would settle for nothing more than a free copy of "Monopoly: Socialism," because, as I'm sure you'll agree after reading the unintentionally funny tweets below, the game sounds awesome!

I bought a copy of Hasbro's mean-spirited and woefully ill-informed "MONOPOLY: SOCIALISM" board game so you don't have to - a thread 1/

Twitter user Nick Kapur — who "only tweet[s] extremely interesting things," according to his bio — "bought a copy of Hasbro's mean-spirited and woefully ill-informed MONOPOLY: SOCIALISM board game so you don't have to."

So I "don't have to," Nick? Why, I wanted to buy the game from the moment I read your tweet, "From the tagline 'Winning is for capitalists' we can see right away that this game is not going to be friendly to whatever it deems 'socialism' to be." So, again, thank you.

If your second tweet wasn't enough to peak my interest in "Monopoly: Socialism," your comment deep into your Twitter rant—that "There are also tons of references to health food and veganism, despite the lack of any clear connection to socialism, apparently because what they share in common is that they are odious things that are fun to mock" — would have sealed the deal for me. Because I agree that health food and veganism have nothing in common with socialism except providing great targets for much mockery. I do love mocking vegans. And socialists, as I'm sure is evident by now.

Although, now that I think about it, veganism and socialism probably do have a connection. I mean, once socialism bankrupts our society and reduces everyone but Comrade Bernie and AOC to subsistence living, all we'll be eating will be whatever shriveled roots we can pull out of the dirt. I'm sure that a study somewhere proves that socialism leads to veganism. There's the connection. Hasbro, am I right?

And, Nick, by the time I read, "when you pass go, you get a $50 'living wage,' which was presumably reduced from the usual $200 to emphasize that 'socialism makes everyone poorer' or somesuch," I knew that I would be making a patriarchal rule that the only game played in my house on game night henceforth will be Hasbro's Monopoly: Socialism. Thanks to your Twitter meltdown, I get to incorporate both fun and education into family game night.