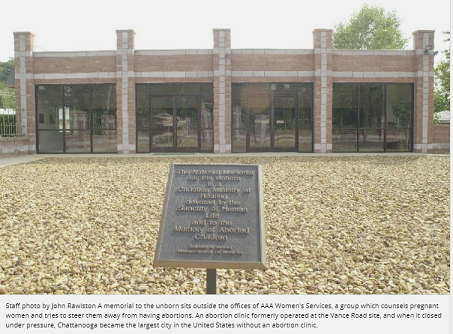 NOTE:  I was blessed several years to tour this amazing place and hear the story firsthand of how it came to be and some of the stories about those who have come there to greive, or heal, or whatever helps them to come to terms with what happend.  It felt ike a very Holy place to me.

Editor's note: This is part of an ongoing series commemorating the 150th anniversary of the Chattanooga Times Free Press. To read more, visit timesfreepress.com/150years.

Those two headlines bookend nearly a decadelong effort by a collection of evangelical Christians to close Chattanooga's only abortion clinic. The battle saw three different occasions when protesters were arrested for blocking the entrance to the clinic on Vance Road in Brainerd, and an unexpected ending that gave the Chattanooga Times and Chattanooga News-Free Press ample opportunities to chronicle the ongoing debate.

Patricia Lindley, Dr. Dennis Bizzoco and Mike Jennings were all at the epicenter of the effort by a loosely knit group of evangelical Christians who shut down Chattanooga's only abortion clinic in 1993.

The front page of the Saturday, May 1, 1993, edition of the Chattanooga News-Free Press reports on a successful bid by a pro-life group to purchase the Chattanooga Women's Clinic.

There were others, to be sure, who can tell the story as well as Lindley, Bizzoco and Jennings, who gathered recently to remember a time three decades ago when, in a single day, Chattanooga became the largest city in America without a practicing abortion clinic.

Lindley was the public face of the movement, Bizzoco a passionate protester and Jennings a lawyer. They talked and laughed around a breakroom table in Bizzoco's podiatry practice like three high school friends gathering at a 30-year reunion.

"Wow, we've really gotten older," said Lindley, who was the first liver transplant recipient at Emory University in 1994 and has many times over defied the life expectations for liver transplant patients. "It's just good to be here."

All three agree 1989 was a year when the broader Chattanooga community became aware of the efforts to stop abortions at the clinic, but the genesis of the effort began in 1985. Then, a small group from various churches had begun praying on the public right of way in front of the clinic and offering counseling to women arriving for appointments. They were on site each day the clinic was open.

At the same time, AAA Women's Services, a crisis pregnancy center, opened across the street from the clinic on Vance Road. It remains in business today as Choices Chattanooga and is located in half of the former abortion clinic. The other half houses the National Memorial for the Unborn, a place where about 3,800 plaques are placed by women and families in memory of their unborn children.

"Operation Rescue and arrests were happening across the nation," Jennings said. "We had a group here. There was a group of sidewalk counselors, AAA, Bethany Christian Services for adoptions and a student group at UTC."

The focus of attention at the clinic resulted in court actions to the point where Chancellor Howell Peoples had a white line painted on the sidewalk.

On Jan. 22, National Sanctity of Human Life Day, the group that would go on to become the Pro-Life Majority Coalition of Chattanooga (PROMACC) seven months later, organized an anti-abortion rally that led to the first arrests at the women's clinic.

The rally had been planned for a parking lot at Provident, now Unum, donated by the Maclellan family.

"When we started publicizing it, some other powers-to-be objected, and we had to move it at the last minute to CCS [Chattanooga Christian School]," Lindley said. "We still had several hundred people."

Later, Bizzoco and 76 others crossed the white line and blocked the entrance to the clinic. There was no violence. All were arrested and the charges were dismissed in city court.

Three months later, around 20 more were arrested, again for blocking the entrance and again without violence; four spent five days in Silverdale Detention Center. In October 1989, more protests and more arrests. Eight protesters would go to trial in September 1990. Bizzoco was arrested each time but didn't go to jail or to trial.

"I had a good lawyer," he laughs, referring to Jennings.

Jennings' law partner, Hoyt Samples, was the lead attorney for the arrested protestors in a trial before the late Judge Doug Meyer. A jury was seated, and pretrial motions heard on Sept. 13. Meyer told Samples and Jennings that they would not be able to use the necessity defense.

"The defense was the common defense around the country of those arrested at abortion clinics," said Jennings. "It simply said it was OK to violate the law if you are acting out of necessity to prevent a greater offense. Hoyt and I gathered the defendants in an adjacent, empty courtroom and said, 'You are all going to jail. That was our only defense.'"

That Thursday night, an anti-abortion volunteer gave Jennings a schedule from the clinic found while legally searching through a dumpster. The schedule showed the clinic had been performing second-trimester procedures, which was against Tennessee law. On Friday, presented with that evidence, Meyer reversed course and allowed the necessity defense. The clinic business manager confirmed under oath that second-trimester abortions had been performed on Vance Road. The prosecutors asked for a recess.

"God used ordinary people to achieve extraordinary results," Hoyt said. "If there was no reason that I went to law school other than to try that case, that was enough."

Two years later, Bizzoco offered to buy the clinic from Porter Yarbrough, a local Realtor who owned the property. Bizzoco didn't have the money. Failing health led Yarbrough to file for bankruptcy, and the clinic was listed as an asset.

PROMACC officials did not know the property was in bankruptcy until Thursday, April 22, 1993. A local physician who was a creditor in the bankruptcy called a friend at PROMACC and told him of the bankruptcy and that the physician running the clinic had placed a bid to buy the clinic.

The board was scheduled for its quarterly meeting that night. Jennings, the group's treasurer, said there was less than $1,000 in PROMACC's bank account. The entire meeting focused on how to raise money to buy the clinic and close it permanently. Board members used their network to seek funds.

There was a single $100,000 donation and the rest in smaller amounts. By Monday, April 26, PROMACC had enough money to inform the bankruptcy court that it would make a counter offer. The next Friday morning, Jennings sat in bankruptcy court as motions on all cases, including the clinic case, were heard.

"The room was full of bankruptcy attorneys who saw what was going on in our case," said Jennings. "I was sitting on the front row, and one of them came up to me and whispered, 'I'm good for $10,000 if you need it.' If we hadn't had that pledge, we would not have had enough money."

The judge, acknowledging two legitimate bids, set an auction for Friday afternoon that would begin at the existing offer of $264,000 and go up from there in $5,000 increments. The limit for PROMACC was pre-determined to be $294,000. Four bids got the group to $294,000, and the physician did not counter.

"If he had gone one step further, we were done," said Jennings, who testified in the morning and was called one of the "street rowdies" creating problems. "What happened in a week is the one thing in my life that I can point to and say, 'You cannot explain this in any way without God.' You simply cannot come up with any explanation of how that money and those events came together."

The owners of the clinic, Sue Crawley and Fran Muzzoco, both died in 1993. Yarbrough, owner of the building and property, died in 2011. Dr. Ed Perry, who sought to buy the clinic in bankruptcy after the owners' deaths, died in 2015.

Planned Parenthood of Tennessee North Mississippi did not respond to a request for comment, nor did attorneys involved in the legal cases.

The Sunday News-Free Press, which sold for $1.25 at the time, reported that "approximately 70" protesters were arrested at the clinic on Saturday, Jan. 21. The newspaper featured a two-column picture over its six-column layout that showed law enforcement carrying one man off the clinic site.

The report's fourth paragraph reads, "'The party is over folks,' said Mr. [Bill] Tickel. He said 1988 was the abortion clinic's 'last good year.'" Tickel was the local leader of anti-abortion group Operation Rescue.

The story continued, "The protesters, who were arrested over a two-hour time span, were all charged with criminal trespass and taken to City Jail in police vehicles ranging from patrol cars to converted school buses to converted commercial buses."

The Chattanooga Times, which sold for 25 cents an issue, did not publish on Sunday in 1989 as part of the joint operating agreement with the News-Free Press. A day behind the story, the paper's editors pivoted to a National Sanctity of Life Sunday rally in Bradley County, Tennessee, to lead its report. The third paragraph summarized what happened the previous Saturday.

"That service, and a small protest in downtown Chattanooga, came a day after about six dozen protesters were arrested on charges of criminal trespassing at a Chattanooga clinic where abortions are performed," it states.

In September of 1990, both newspapers reported on the trial of the protesters arrested in October 1990.

"Abortion labeled as real issue in trial of 8 clinic protesters," the second paragraph said. "But the real battle, that for public opinion, is being fought in the hallway outside the courtroom."

"There — away from the watchful eye of Criminal Court Judge Doug Meyer, who has slapped a gag order on defendants and attorneys — supporters of the defendants are arguing that the issue here is abortion, not trespass."

When the trial ended abruptly the next day, the News-Free Press displayed a four-column picture of Samples introducing the defendants to the jury with Jennings sitting to his side. The headline and subhead said, "Appeal Halts 8 Pro-Lifers' Trial."

"Judge Would Allow Testimony on 'Illegal Abortions'" was the secondary headline.

The next morning headline in the Times read, "Protesters' case ends in mistrial."

"Since the Chattanooga Women's Clinic opened almost 20 years ago, anti-abortion rights activists have prayed, picketed and preached outside the facility's doors, hoping to turn away patients wanting abortions — and maybe, one day — close the facility down.

"Friday, a local anti-abortion group decided if it couldn't beat 'em, it would buy 'em.'"