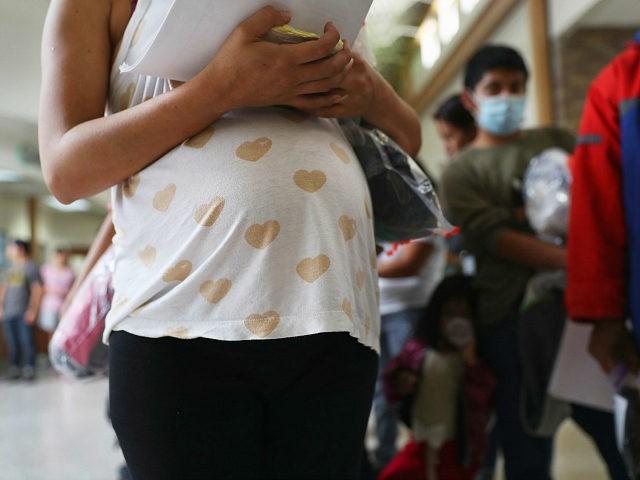 A “growing number” of pregnant migrants from across Central America are waiting in Mexico as they hope to deliver their babies in the United States to secure them birthright citizenship, NBC News reports.

A report by NBC News chronicles how pregnant migrant women are increasingly flowing into shelters in Mexico along the southern border as the Trump administration’s “Remain in Mexico” policy mandates they wait there while their asylum claims are reviewed.

A growing number of expectant mothers are among the migrants coming in daily from Honduras, Guatemala, El Salvador — even Haiti — to more than 30 already overflowing shelters in Tijuana, Mexico. [Emphasis added]

“More women are arriving pregnant or with babies,” said pastor Gustavo Banda of the Embajadores de Jesús (Ambassadors of Jesus) church, which operates a shelter in Cañón del Alacrán (Scorpion’s Canyon) on the outskirts of Tijuana. “We have a lot of Haitian women and some Central American.” [Emphasis added]

It’s a period of great anxiety, if only because many want their children born in the United States. The U.S. Constitution guarantees that every child born on American soil automatically becomes a U.S. citizen. Mexico also offers birthright citizenship, but it’s not exactly the same: A child born in Mexico, regardless of their parents’ nationalities, automatically becomes a Mexican citizen when they turn 18. [Empahsis added]

The report sheds light on the dangerous journey that pregnant migrants endure, often risking their lives and their unborn child’s life, to attempt to deliver their baby in the U.S. to secure American citizenship.

In Chicago, Illinois, as Breitbart News recently reported, pregnant women from the Middle East traveled hours to deliver their babies in the U.S. and thus securing them American citizenship.

The children of illegal aliens, after being granted birthright citizenship, are able to anchor their illegal alien and noncitizen parents in the U.S. and eventually are allowed to bring an unlimited number of foreign relatives to the country through the legal immigration process known as “chain migration.”

Today, there are at least 4.5 million anchor babies in the U.S., exceeding the annual roughly four million American babies born every year and costing American taxpayers about $2.4 billion every year to subsidize hospital costs.

18-Feb-2020
Our Military Should Be Cultivating Masculinity, Not Denigrating It 17-Feb-2020
Think LGBT cultural changes ‘won’t affect you’? Here’s the ugly way they do 14-Feb-2020
STUDENT EAGLE REPORT

18-Feb-2020
Our Military Should Be Cultivating Masculinity, Not Denigrating It 17-Feb-2020
Think LGBT cultural changes ‘won’t affect you’? Here’s the ugly way they do 14-Feb-2020
STUDENT EAGLE REPORT