NEWS
‹‹ Ocasio-Cortez Tried To Hit Back At Her Critics With This 'I Am The Boss' Moment Over Green New Deal
New DOJ Report: 1-in-5 Federal Prisoners are Illegal Aliens ›› 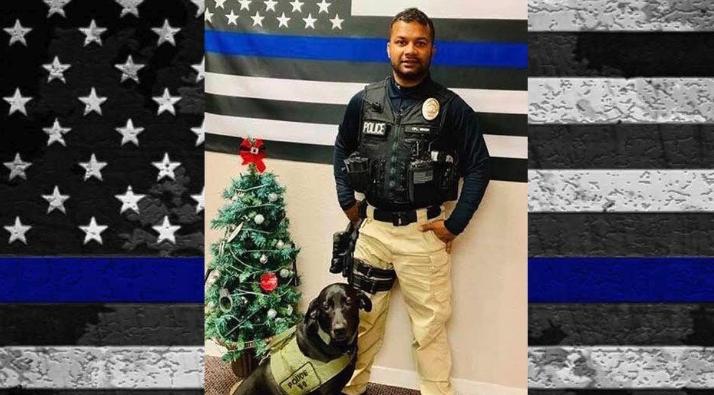 The murder of Newman California Police Corporal Ronil Singh allegedly by an illegal alien with a criminal past is the latest high-profile killing of an American citizen that contains nearly every element in our illegal immigration discourse.

Singh, 33, legally immigrated to the United States, became a U.S. citizen, and then became one of Newman’s finest citizens serving as a police officer for twelve years. Singh’s legal entry into the U.S. added value to our country. Sadly, this husband and father of a 5-month-old son was allegedly murdered by an illegal criminal alien gang member on Christmas Eve.

This tragedy was preventable.

Singh’s suspected murderer had “prior criminal activity that should have been reported to ICE,” Stanislaus County Sheriff Adam Christianson had said. “Law enforcement was prohibited because of sanctuary laws and that led to the encounter with (Cpl.) Singh… the outcome could have been different if law enforcement wasn’t restricted or had their hands tied because of political interference.”

California is a state that provides a safe harbor for people illegally in the country. California boasts its status as a sanctuary state in violation of federal law and the supremacy clause in Article VI of the U.S. Constitution. California cities have passed laws prohibiting local law enforcement agencies from cooperating with law enforcement officers from the U.S. Immigration and Customs Enforcement (ICE) with the apprehension of illegal immigrants even after they have committed a crime. Many of these illegal criminals continue on to murder, rape and rob U.S. citizens post-release from a local jail under the catch-and-release policies before notifying ICE officials.

Currently, the threshold for immediate deportation proceedings is set too low. Catch-and-release instead of being detained pending an immigration hearing is like unleashing a dangerous animal into a public space. Eventually, we’ll be dealing with an avoidable catastrophe.

Typically the definition to detain involves only crimes such as murder, rape, and armed robbery. That’s about it. Serious drug dealing or gun possessions are not considered crimes of violence under this strict definition. Neither does burglary or the severe crime of driving under the influence of alcohol. As we have seen over and over through the cost of American lives, many additional crimes pose equally great risks to our communities should these illegal criminal aliens be released without detaining for ICE.

Burglary is a felony and as far as I am concerned a crime of violence. It’s not merely a property crime that results in minor victimization. It involves forced entry. It is a category Part I crime by FBI statistics. Part I crimes are serious felonies. Anybody whose home has been broken into suffers a traumatic mental experience. I have seen it when investigating burglaries. People who once felt safe in their homes lose that sense of security after their home is burglarized. Their kids have nightmares; adults sleep with one eye open and every little noise in the house startles them. It takes a long time to heal. Burglary costs Americans an estimated 4 billion in property loss every year, but this does not include the psychological damage. The fact that many states allow residents to use deadly force to stop intruders means that a burglary could end violently for the intruder. It will if it happens at my home and I am there.