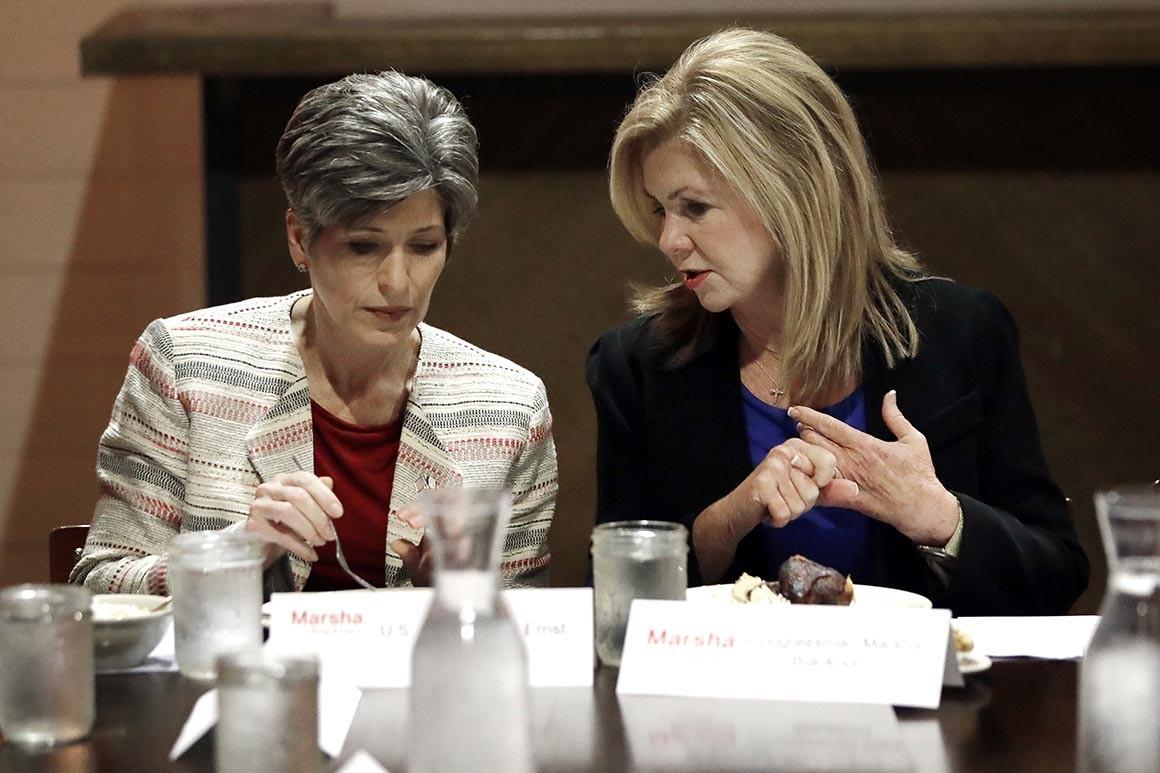 Freshman Sen. Marsha Blackburn of Tennessee and Sen. Joni Ernst of Iowa will become the first Republican women to serve on the Judiciary Committee when the new Congress is seated this week, according to a roster obtained by POLITICO and confirmed by a Capitol Hill source.

The appointments solve a longstanding optics problem for Republicans — there are four Democratic women senators on the influential panel, including ranking member Dianne Feinstein (D-Calif.), in contrast to the previously all-male GOP slate — while putting Blackburn and Ernst in a position to preside over judicial nominations and certain women’s issues including the Violence Against Women Act.

Conservative lawmakers and outside advocacy groups hope the appointment of the two senators will deflect the kind of criticisms that surfaced when the Judiciary Committee investigated charges of sexual assault during the confirmation of Supreme Court Justice Brett Kavanaugh and Republicans hired a female outside counsel to question Kavanaugh and his accuser.

A spokesman for Majority Leader Mitch McConnell said the committee appointments had not been finalized.

Outside conservative groups are especially excited about the appointment of Blackburn, who over eight terms in the House staked out a reputation as one of the most vocal foes of abortion. The newly elected senator is perhaps best known for leading a special House panel that investigated since-discredited charges that Planned Parenthood was profiting from the sale of tissue obtained from abortions. Blackburn boasted about this role during her Senate campaign, saying it proved her “100 percent pro-life” bona fides.

Ernst, who is up for reelection in 2020 and was once considered a potential running mate for President Donald Trump, is a staunch conservative who has authored legislation defunding Planned Parenthood and who praised her home state's abortion ban as an "important step forward." Iowa's ban is among the strictest in the country but a court has put it on hold.

“Having a woman Republican senator would have really helped with the Kavanaugh hearing and some of the pushback we saw,” said Kristan Hawkins, president of Students for Life of America. “It was really unfortunate that the hearing fell right into the narrative the other side was trying to paint, that pro-lifers are all men and are anti-woman, which is just not true.”

Questioned about the lack of Republican women at the time, then-Judiciary Chairman Chuck Grassley (R-Iowa) answered, “It’s a lot of work. Maybe they don’t want to do it” — a statement for which he later apologized.

“Everyone knows Republicans need women on Judiciary,” said Marilyn Musgrave, the vice president of anti-abortion Susan B. Anthony List, who served with Blackburn in the House and urged her to make a play for the Judiciary seat. “It will take away the critics asking, ‘Where are the women?’”

Besides becoming the committee’s only Republican women, Blackburn and Ernst will be among the few members on the panel without a law degree. Blackburn has a bachelor’s degree in home economics while Ernst, who served in the Army National Guard, has a master's degree in public administration.

Now that Democrats have taken back control of the House, effectively closing the door on Congress’ ability to cut Planned Parenthood’s funding, conservative groups are focusing their energy on federal courts and the executive branch.

Over the last two years, the committee’s Republican majority has voted to confirm many federal judges with anti-abortion views. But few of the current members have devoted themselves to the issue like Blackburn, who also served on the Trump presidential campaign’s “pro-life coalition" and led the charge for a 20-week abortion ban that ultimately died in the Senate.

“They’re all anti-choice ... but she has really crusaded on it and made it a significant part of her brand,” said Adrienne Kimmell, vice president of communications and strategic research for the abortion rights group NARAL. “And now being on such a powerful committee allows for more of a microphone.”

Kimmell said Senate Republicans have to do more than appoint women to a powerful committee to change their image.

"Just because a woman serves in a particular role doesn’t mean that person exemplifies values that are going to be best for women and families in this country,” she said.

Marianne LeVine and Sarah Karlin-Smith contributed to this report.